Harry Potter and the Cursed Child is not written by J.K. Rowling

All seven Harry Potter novels are my favorite books and I became very excited after discovering a new addition to the series in the form of a stage play and its script publication. Upon recovering from the pleasant shock two natural questions immediately formed in my head.

The answers to these questions were not obvious to me at first. Moreover, they seemed contradictory. If the book is the eighth Harry Potter story how can it not be written by J.K. Rowling? After all, if the book was written by somebody else it should not be considered official, right?

I will show how I found the answers. I did not want to be compared with Rita Skeeter and therefore I tried to stick to the facts and analyze information from official sources before making conclusions.

The cover of the book

Let’s first look at the cover of the book. 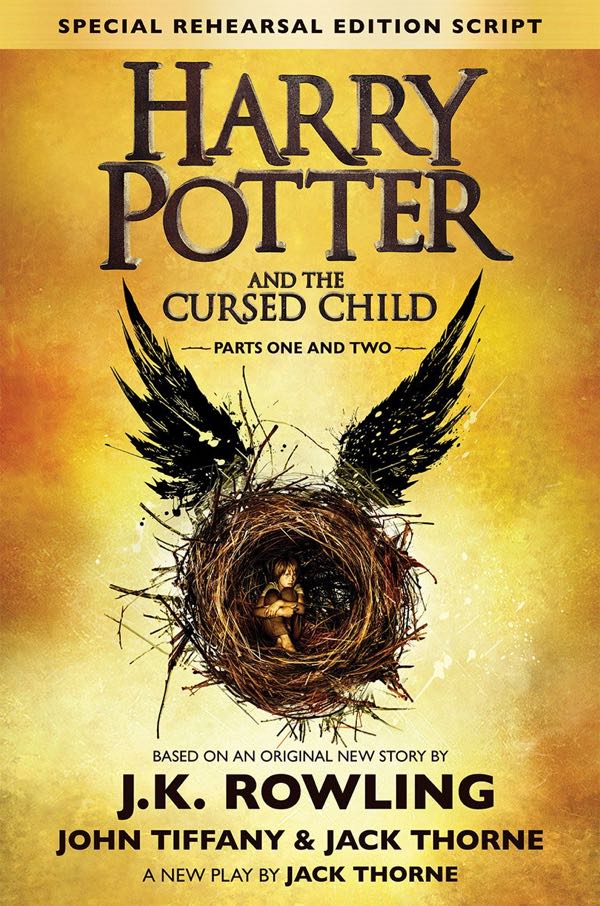 The cover of the book. Source: amazon.com

Among other things the cover says:

Based on an original new story by J.K. Rowling, John Tiffany & Jack Thorne.

Notice the use of the word “story” which is followed by the name “J.K. Rowling”. The word “story” does not always mean a written story. This is a very smart cover design from the marketing perspective because it tricked me to believe that J.K. Rowling was one of the authors.

If we spend more time examining the cover we can reveal more ingenious marketing traps in the choice of the font sizes. For example, the words “Based on an original new story by” are written in the smallest font while the words “Harry Potter” and “J.K. Rowling” dominate the cover. I was amused to notice that the text “J.K. Rowling” was printed with slightly larger size than “John Tiffany & Jack Thorne” and the words “a new play by Jack Thorne” were smaller still.

Let us turn our attention to the pottermore.com web site. A post titled “New details on Cursed Child, the ‘eighth Harry Potter story’” has the following subtitle:

‘Harry Potter and the Cursed Child’ is the official eighth Potter story and the first to be presented on stage.

This article continues with the following sentence:

Written by Jack Thorne and directed by Olivier and Tony award-winner John Tiffany, the play is a brand new story written in collaboration with J.K. Rowling.

I hope you are more attentive than me and noticed a subtlety in the language here which I missed at first. The article says that the story was written in collaboration with J.K. Rowling. What it does not say, however, is whether J.K. Rowling participated in the actual writing.

The three of them [meaning J.K. Rowling, Jack Thorne and John Tiffany] set the plot that day in J.K. Rowling’s writing room. They strung together the narrative then and there in notebooks and then Jack and John flew back to London to get started.

This text is accompanied by a picture of J.K. Rowling sitting at a table and writing something with a pen or a pencil in the company of two gentlemen who are not writing. What this text tells us is that J.K. Rowling discussed the plot of the play with Jack Thorne and John Tiffany before the gentlemen started working on it. The article does not say whether J.K. Rowling was writing the Cursed Child script even though she is writing something in the photo and we are told that the discussion happened in her writing room. Very smart indeed.

Finally, here are some tweets related to the Cursed Child story posted under @jk_rowling account. I assume it was J.K. Rowling who wrote them.

It will tell a new story, which is the result of a collaboration between writer Jack Thorne, director John Tiffany and myself.

The story of #CursedChild should be considered canon, though. @jackthorne, John Tiffany (the director) and I developed it together.

#CursedChild is a play and while we have worked very closely on it, the wonderful writer is @jackthorne

... I haven't written the script for #CursedChild, @jackthorne has.

I think it is fair to make the following conclusions based on the information from the official sources presented above.

After all this investigation I find myself protected from the charms of the marketing wizards and can see what the Cursed Child story is and what it isn’t. It is the official Harry Potter story because J.K. Rowling said so. At the same time, Cursed Child is the the first official Harry Potter story that is not written by her. I hope that you found my logic reasonably convincing.